Frankel is back in action to make his 11th career start and more than likely his 11th career victory. The Queen Anne has for the past few years been the most exciting race of the festival going into the week. Some consider it a shame that such a central race is used to kick off the week but it certainly helps to have a good race to start with. This year looks a non-event in terms of betting, but is it?

Frankel - You'd be mad to take him on, punter or trainer

The highest rated horse in the world, Frankel, is set to line up and on all known form he will win, probably by 3 to 4 lengths. He’s already won impressively on the straight course at Ascot but it was on the round course last year that he had his biggest fright. Kicking for home about 4 furlongs from the line, Tom Queally left a lot to be desired when Frankel won by his shortest distance apart from his debut. Lessons were learned that time and I don’t think anything like that is likely to happen again. There is no horse in here that can conceivably touch Frankel and he is well deserving of his 1/6 price tag. Is that value? Probably.

The second best horse in the race by a clear margin is Excelebration who comes into the race looking for his 4th straight thrashing at the hands of Frankel. The interesting thing to note is that every time he has faced Frankel, other than at the Royal meeting last year, he has finished a clear second but was beaten into third in the St James’ Palace Stakes. That, along with the fact that he will be likely be the only one trying to beat Frankel, could be the danger of him not filling second spot. He is proven on soft surfaces though and a straight mile is ideal. It’s hard to see anything apart from Frankel beating him.

Richard Hannon won the Queen Anne last year with Canford Cliffs and now sends his best miler to try and repeat the feat. Strong Suit is a classy horse, no doubt, but the one thing missing on his CV is a win over a mile. He can be excused his poor showing at the Breeders’ Cup last back end but he pulled hard in the Prix Jean Prat on his first start over a mile and didn’t get home. There’s no guarantee that he can stay the 8f but the biggest worry would be that he faces the strongest field of his career here. He’s four pounds clear of the next highest rated horse and the tricast could be a popular bet but I’d like to take him on.

Godolphin run Helmet who raced in Australia in his early career. He built up a big reputation over there winning three Group 1s including the Caulfield Guineas, the Australian equivalent of our 2,000 Guineas. His form has since collapsed after all that promise. He was beaten 2 lengths in a 3yo Group 3 and near tailed off in Group 1 races at Flemington and Meydan in March this year. Trainer Mahmood Al Zarooni is a very talented horseman and if he feels the horse is capable of running well then that is a plus, maybe the only thing going for his chances here. I’m looking forward to seeing Helmet’s UK debut but I will be watching him, not betting. 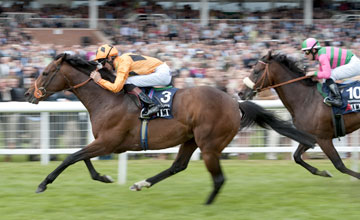 The most interesting of the outsiders might be Worthadd who has joined Sir Mark Prescott’s yard this season having spent his career thus far training out of Italy. Mark Prescott is a trainer whose talents everyone in racing can appreciate and if anyone can get Worthadd back to his best it’s Prescott. Worthadd’s best form came on his only previous visit to the UK when finishing less than two lengths second to Canford Cliffs in the Lockinge at Newbury on good to firm. He has had two runs for his new trainer winning a G3 in Germany and being beaten at odds on at Epsom’s Derby meeting behind Side Glance who reopposes. He is not the most reliable horse but he could have more to give than he’s shown in his two starts so far this season.

Side Glance had the beating of Worthadd last time in the Group 3 Diomed at Epsom but it’s arguable that the latter didn’t take to the track and would be better over the mile. He has decent form at Ascot when 3rd of five, three lengths behind Dick Turpin and Fanunalter of Marco Botti. Coming in here off the back of a win will give punters confidence but I feel he’s a better horse on a sounder surface. He should be another one who isn’t foolish enough to try to win the race and will have their eyes on second and third. He stays the trip well and is a big player for filling the places.

Red Jazz has been beaten by many of these repeatedly while still giving the impression that he is reasonable horse. He’s never won a race over 8f and seems to have regressed since his best days as a younger horse. I would be confident in taking him on over the mile on softer ground.

Premio Loco is maybe the last horse capable of challenging for the placings but it is hard to see him being competitive on ground softer than he has ever won. He comes into the race off the back of two consecutive wins on the polytrack including the Winter Derby at Lingfield, picking up over £100,000 with those victories so it’s easy to see why owners can afford to send him here with little chance of placing but with £4,000 on offer for 6th place he could claim a bit more prize money.

There is no point in trying to take on the world’s best horse here. Unless he has a physical problem there is no way to see him do anything but win by 3+ lengths. There could be a betting opportunity in the winning distance with SkyBet offering 7/4 that Frankel wins by 3 – 5.75 lengths inclusive. He has a fairly predictable record in this category, especially against Excelebration. The betting without Frankel is probably the most appealing. Excelebration is deservedly a short price at evens to win without the fav but perhaps a good each-way alternative is Worthadd who we have seen to be capable on a softer surface and talented enough to finish second to Canford Cliffs. It’s still not a betting opportunity I’m massively keen to take up. Good luck with your selections!

See all posts written by Nulty